- also known as the Straży (Guard), Budzielna (Waking), Alarmowa (Alarm) and Hejnalica (Heynal) Tower – is the only tower in the world from which a trumpeter has played the Heynal (bugle call) to the four quarters of the globe every hour throughout the whole day for over six hundred years. In order to see and hear these marvels one has to climb 239 steps to the height of 54 metres. St. Mary’s trumpeter needs two and a half minutes. We do not have to hurry that much. What is most important is that up there we are expected by the always cordial heynal guards, the last magicians of Kraków. 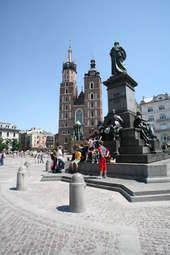 Trumpets have played from the towers and gates of Kraków ‘forever’ announcing the beginning and end of day. Behind the walls the morning opening of the gates was awaited by the travellers met by the night near Kraków.

How did these first melodies played from the defensive towers of the City and the Wawel Royal Castle sound like? This we will probably never know. All is known is that when at the end of the 14th century Kraków swarmed with Magyars (as Jadwiga, the future wife of Jagiełło, was to come to the throne), one of the barrels with delicious Hungarian wine brought us ‘hajnal’ from the Danube area. It came and stayed at the Kraków’s sky forever. At first it was probably played by Hungarians, and then – when the guard at Wawel and St. Mary’s Tower changed – also by Poles.

Kraków is the only city in the world where the medieval tradition of playing the tower heynal every hour has survived till the present day despite the fact that the performers of St. Mary’s melody were more than once in terrible danger. Legend has it that the Heynal was interrupted together with the trumpeter’s life by a Tatar arrow. The second death incident at the Tower took place in 1901. Trumpeter Antoni Dołęga managed to play three times: for the King (window overlooking Wawel), for the Councillors (Cloth Hall and Main Market Square) and for the city’s guests (Barbican, Florian Gate). The fourth performance (window oriented at the east with the Fire Brigade Headquarters) never took place. In September 1939 the German occupant prohibited the playing of the Heynal for several months. In 1980 an invasion of true bugs caused that for several weeks the Heynal was played from the Town Hall’s tower.

From 1927 one does not have to come to Kraków to hear the Heynal, as it is broadcasted by Radio Kraków. In the Heynal trumpeters’ room at the Tower there is the Marconi tube that has been in excellent operation for over seventy-five years and transfers the melody from the golden trumpet to the radio’s offices and from there to the whole world. Today it is enough to set the radio to the right waves at 12 PM of the Polish time, and listen to the most beautiful melody of Kraków. It is, mind you, the oldest regular music radio broadcast of the world!

Who is playing? There are in Kraków (and other places) people who can unmistakably recognise the performer by the manner of playing the Heynal. It used to be Śmietana or Rusin, and recently it has been Skowronek or Kołton. The City has always been especially sentimental towards its Heynal trumpeters. At first they were called “tower trumpeters” selected from the faultlessly conducting men aged 20-35 who could read and write (the first woman to play the Heynal from the Tower was Anna Kula as late as 1993). Similarly high requirements were posed in front to the firemen of the professional fire brigade who have been uninterruptedly in service at the Tower since 1874, that is, for 130 years. During the 24-hour duty both Heynal trumpeters play the Heynal 48 times preceding every round with a tug on the rope of the tower clock: first goes ‘bum, bum’ and then ‘traatatata.’ Unlike their predecessors they do not have to watch out through the windows to see if any enemies are approaching Kraków, or whether a fire has broken out somewhere. They are there to play as beautifully as they can. They do not have to worry about themselves as they are connected with the ground by a phone. And if, touch wood, there is a fire at the Tower (there had been such cases), the firemen with climbing training can evacuate themselves from below the sky using ropes.

Once we’ve rested a while after all the climbing (counting the stairs is recommended!), we will see a view worthy of our climbing efforts. We will also see the room of the golden trumpet wizards, names of the first trumpeters signed or engraved on wooden beams, the equipment on which they were and are playing, the historical radio tube and evacuation ropes. In a word, the Tower will hold no secrets against us any more.

All one has to do is to climb up.

The higher tower of the Basilica of the Assumption of the Virgin Mary has been piercing the sky above Kraków for over six hundred years. It is 81 metres high and is topped with late-Gothic cupola and golden crown, and the small room 54 m above the surface of the Main Market Square there is the Highest Post in the Republic of Poland. Highest meaning most important. That’s right! Because, according to tradition, one can see from there all Polish lands: the white peaks of the Tatra Mountains in the south, the Silesian chimneys in the west, the towers of Lviv’s churches in the east, and the dark navy blue line is truly the Baltic Sea in the north.

The tower has ‘always’ been at the disposal of the city authorities. “At their order the people keeping watch at the Highest Post carefully observed whether any unwanted guests were not coming to Kraków or there was not a fire somewhere; they tugged at the clock’s ropes chiming subsequent hours, and busily blew the golden trumpet playing church tunes at Our Lord’s glory and the Heynal at the City’s glory.” All this caused that the entrance to the Tower for “those below” has always been very attractive. There were always people billing to visit the interior, peculiarly among the young who were not scared of the sometimes steep, stone and wooden stairs (there are 239 of them). Organised “tower tourism” started most likely after the First World War and was later revived after the Second World War. In 1961 the condition of the Hejnalica Tower was so poor that further admittance of guests became impossible. Therefore, the Tower was closed for visitors “for several weeks” that turned out to be several decades in practice. Despite the long-completed comprehensive renovation works and installation of all necessary security facilities, the Kraków authorities decided to present (not only) Poland with the reopening of this historical site as late as 2002.

St. Mary’s Tower is used by the City (if one disregards the 40,000 pigeons living in the Main Market Square) and belongs to the Parish of St. Mary’s Basilica. The Heynal trumpeters who are on 24-hour duty are the officers of the State Fire Brigade. We owe the fact that we can climb up to the top of the Hejnalica Tower to their kindness and trust laid upon us.

How to make the journey to the Highest Post shorter? It is best to count the stairs. One can also think about the fact that: