In the year 2000, we celebrated the 600th anniversary of the renovation of the Jagiellonian University, the oldest Polish school of higher education. 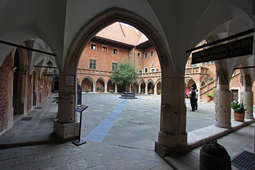 In 1400, Władysław Jagiełło renewed the university, established in 1364 by King Casimir III the Great as the Kraków Academy. It is the second oldest Unicersity in Central Europe after the Charles University in Prague. In the Middle Ages, the ideas that originated at this university radiated to the whole European continent. The golden age is the period of the greatest prosperity of Kraków, when currents of humanism and reformation were shaped, determining the city's future identity.

Tags: culture, Krakow, city, tourism
MPI browser
PUBLIC INFORMATION BULLETIN
OF THE CITY OF KRAKÓW
Places to go
What? Where? When?
For tourists