The Royal Route for the disabled tourist 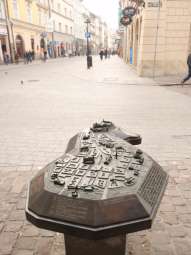 Walking Kraków's Royal Route, we stop by 12 models depicting the most important elements of the built heritage between Barbican and Wawel. With three exceptions, they are set on stone plinths 85 to 90 cm (33-35 in) high, allowing wheelchair access. The oblique surfaces (later called friezes) around the models are equipped with short descriptions in the Latin alphabet, and in Braille in Polish and English. Information about the placement of the descriptions on the remaining three models (suspended on walls) will be provided in their vicinity.