Our website uses cookies, as almost all websites do, to help provide you with the best experience we can.
MAGICZNY KRAKÓW 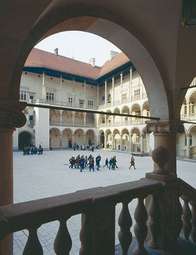 The oldest ruler’s seat was established at Wawel in the 1st half of the 11th century during the rule of Boleslav the Brave and Mieszko II. The pre-Romanesque complex of prince’s residence was located in the highest south-east part of the hill. It included the residential building, the palace hall, the building with a corridor (cellar) and the Rotunda of St. Felix and St. Adaukt, the best preserved example of the pre-Romanesque architecture in Małopolska.

In the 2nd half of the 11th century the main building of the Romanesque palace complex, the two-storey hall of 24 pillars was erected. The remains of this structure were discovered under the northern wing of the present palace. The main palace church in the 11th and 12th century was the Romanesque basilica of St. Gereon (St. Mary of Egypt) revealed under the western wing of the palace and the Batory’s Courtyard. Nowadays works are in progress to set up an architectural reserve at that site. The Church of St. Mary of Egypt was a three-aisle building with a transept, an eastern crypt and two towers in the west. It functioned till the end of the 13th century.

In the 14th century the Romanesque palace complex was transformed into a Gothic residence. At the site of the “hall of 24 pillars” a new building was erected probably with three storeys. At the same time the upper castle was encircled with defensive walls. The entrance gate to the palace courtyard (to be later reconstructed) has preserved from that period. During the reign of Casimir the Great (1333-1370) the residential part of the castle was expanded by reconstructing the old buildings and adding new ones. For example, the representative and residential wing with the arcade cloister was erected.

At the end of the 14th century, during the reign of Władysław Jagiełło, the great construction campaign covered the south-east corner of the palace. A new residential tower with external tracery decoration (the so-called Danish Tower) was erected. Inside one of the ground floor rooms there is a preserved ribbed vault with keystones presenting the coat of arms of Jagiellons and the House of Anjou (the Jadwiga and Jagiełło’s Room). The arcaded gallery leading formerly to the alleged ‘water tower’ took its final shape. This bay was reconstructed with the recently restored coats of arms: Jagiellon Dynasty, the Eagle and the Pogoń (Chase). Since the 17th century the building has been commonly known as the Hen’s Foot.

The present shape of the palace was determined by the great reconstruction that took place in the years 1506-1534 during the reign of King Sigismund the Old. All the works were directed by Francesco of Florence, sculpture and royal architect. The masonry was conducted under the supervision of Master Eberhard of Koblenz and Benedict. The western and northern wing was erected on the basis of Gothic buildings; the eastern wing had new foundations. On the southern side a wall (curtain) was constructed with cloisters closing the Renaissance courtyard. A group of stone masons led by Bartolommeo Berrecci completed and installed Renaissance details in all parts of the palace. Some of window frames and portals had still the Gothic and Renaissance features. During the residence’s reconstruction the old palace chapels, Chapel of St. Mary of Egypt and Rotund of St. Felix and St. Adaukt, were liquidated.

After the fire of 1595 Sigismund III Vasa renovated and expanded the northern wing under the supervision of Giovanni Trevano in collaboration, for example, with Ambrosius Meazzi and Giovanni Battista Petrini. At the beginning of the 17th century a tower covered with Baroque cupola was erected at the north-east corner. Similar residential tower, the so-caled Sobieski Tower, was later added at the north-west corner of the palace. The interiors were fitted with the architectural and sculptural decor in the early Roman Baroque style. The viewers’ attention was attracted by the frame vaults and ceilings completed by Tommaso Delabella, Venetian painter. In the years 1655-57 the palace was plundered by the Swedes who later recaptured the palace in 1702 and set up a hospital and barracks there. It was then that the largest fire in the palace took place. Since then, in the 18th and 19th centuries, it did not regain its former glory despite the undertaken conservation efforts. In the years 1804-1807 the palace was adapted for the barracks of Austrian troops, which included the walling up of the cloister arcades. The conservation works conducted in the year s 1854-1856 lent it the neo-Gothic shape.

The entrance to the palace’s courtyard passes through the gate building reconstructed in the Renaissance style by Bartolommeo Berrecci. The elevation features the stone Piast Eagle with the date of 1370 originally found in the Casimir the Great’s castle in Łobzów. In the hall there are shields with the coats of arms of Poland, Lithuania and the House of Sforza sculpted by Berrecci in 1534. The sub-arches of two arcades in the hall are adorned with rosettes authored by Francisco of Florence (1507) and Berrecci (1525). The classicist crown of the facade dates back to the end of the 18th century.

An unforgettable impression is made by the arcaded courtyard with cloisters that encircle the three residential wings and the curtain wall in the south. On the second floor of the western wing there is a bay representing pure forms of the Florentine Renaissance designed by Francisco of Florence in the years 1504-1507. The decorative bay fitting, arabesque and candelabrum decoration and three polychrome coats of arms are the oldest examples of the Italian Renaissance ornamentation in the Polish architecture. Under the roof the eastern and southern wings are surrounded by the painted frieze with the busts of emperors and empresses authored by Dionizy Stuba in the years 1535-1536. Initially, the frieze adorned all walls of the palace on the courtyard’s side.

Since 1905, when the Austrian troops left Wawel, works had been conducted to restore the interiors according to the historical character. Traces of the building’s adaptation for barracks were removed. The Renaissance vaults and frescoes were reconstructed, and the frame vaults were installed modelled on the 17th century ones in the Podhorce Palace. Window frames were supplemented, and portals were reconstructed. Instead of non-preserved Renaissance tile stoves, five other stoves of the 18th century were brought from the Wiśniowiec Castle in Volhynia. The most valuable set of exhibits consists of the Renaissance tapestries woven around 1550 at the commission of King Sigismund Augustus. They were made in the workshops of Brussels weavers according to the patterns by Michiel Coxcie, an excellent painter. The collection currently includes 138 items, and is the largest and most valuable set of fabrics in Europe.

The palace can be reached by two reception stairways: the Envoys’ Stairway (Poselska) in the eastern wing, following the Italian models of the end of the 15th century (present stair masonry dates from 1927), and the Senatorial Stairway also with the entrance from the courtyard in the northern wing, constructed by Giovanni Trevano after the castle’s fire in 1595.

In the ground floor part of the eastern wing one may note the Gothic-Renaissance portals from the 3rd decade of the 16th century, the item produced in the workshop of Master Benedict as an expression of symbiosis of the northern and Italian forms. Here resided the Kraków governors (officials who managed the royal property and administered the castle) and their deputies.

The rooms on the 1st floor featured mainly private royal apartments, and rooms for the court’s retinue and guests. Nowadays, similarly to other palace interiors, they are richly fitted with works of art that evoke the atmosphere of the royal residence of the 16th and 17th centuries. Some chambers avoided the destruction caused by the fire of 1702, and preserved the Gothic-Renaissance portals of the 2nd quarter of the 16th century, the Renaissance vaults and partial frescoes. In the Danish Tower Sigismund III Vasa conducted alchemical experiments. In the years 1927-1939 it housed the (currently recreated) bedroom of Ignacy Mościcki, President of the Republic of Poland.

The most picturesque rooms of the palace are the interiors of the Hen’s Foot. Two rooms cover the frame vaults with plafonds. The marble portals and fireplace date back to c. 1600, while the interior furnishing comes from the 16th and 17th centuries. On the 1st floor of the eastern wing of the palace there is one of the best preserved Renaissance interiors of the castle. The polychrome vault and wall frieze (extreme) copies the Italian painted friezes with famous figures. Sigismund’s tapestries with the Satyrs’ motive hang on the walls.

The rooms on the 2nd floor were of representative nature and were used for various court ceremonies. They are mostly Renaissance in style with the exception of the northern wing which bears the signs of early Baroque. The preserved portals and vaults come from the inter-war period (1918-1939). The most famous interior of the palace is the Envoys’ Room, also known as the Under the Heads Room. From the old ceiling with sculptures made by Sebastian Tauerbach, a wood carver, about 1540, only 30 sculpted human heads (out of the original number 194) were preserved. It was one of the most beautiful Renaissance ceilings in Europe. Among the interiors of the 2nd floor one may distinguish the following: the Tournament Hall with the wall frieze by Hans Durer (brother of the famous Albrecht) from the 4th decade of the 16th century, Military Inspection Room with the frieze presenting the parade of troops authored by Antoni of Wrocław, the Bird Room, the Eagle Room, and the Senator’s Hall also known as Tanecznica (Dancer).