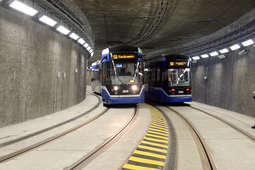 Tickets available from the following outlets will be binding for travelling by trams and buses:
- MPK Season Tickets Sales Outlets (ul. Podwale 3/5, ul. Mogilska 15a, ul. Kalwaryjska 32, os. Centrum D 7, ul. Polonijna 1, ul. św. Wawrzyńca 13, Krowodrza Górka tram terminal),
- MPK Traffic Control Outlets. At all final stops – single, timed, daily, group and family tickets will be sold,
- KKM permanent ticket vending machines – selling all types of tickets, a list of ticket machines is available at http://krakow.pl/komunikacja/kkm/9178,artykul,punkty_sprzedazy.html
- Mobile ticket vending machines installed in vehicles and selling single regular and discount tickets and timed tickets, including the agglomeration ones
- Commercial outlets, e.g. selected newsstands, post offices and others – selling single and timed tickets,
and from vehicle drivers – selling single tickets for one person, regular and discount ones. Agglomeration tickets will only be available from the drivers serving the relevant routes. The driver will only sell tickets in the case of lack or break-down of a ticket vending machine for an exact amount and solely when the vehicle is not moving.

Tickets can be municipal (zone I) and agglomeration (zone II) ones,and are further subdivided into the following categories: single, timed, weekend family and group – for up to 20 people. A season ticket for from 1 month to 1 year can also be purchased for one, two or all routes (so-called network ticket).

Tickets can be either regular or discount.

Discount tickets can be bought by inter alia students and university students, both of domestic and foreign schools and universities. Details on entitlement for free and discount travel can be found at http://krakow.pl/komunikacja/kkm/9178,artykul,punkty_sprzedazy.html

agglomeration tickets are binding for buses whose route crosses two ticket zones, i.e. the Municipal Commune of Krakow and the territories of the towns and communes which have entered into agreements with the Municipal Commune of Krakow concerning local public transport integration.
For instance, when taking route No 292 or 208 to the Airport
Agglomeration routes are marked with three-digit numbers, with the first digit being “2", "3" or "9".
Zone limits are marked in the timetables.

Remember to validate your ticket immediately after entering the vehicle 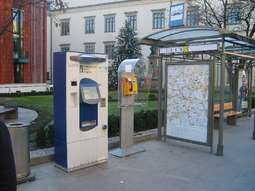 First Krakow City Card vending machines appeared in the streets of Krakow in September 2007. With them, buying tickets in Krakow became much simpler and easier, as now every passenger can do it on their own at any time of night and day.
Krakow City Cards (KKM) can be topped up in 76 vending machines by independently selecting the ticket type and its validity period.

The machines accept cash (PLN) both in the form of coins as well as banknotes. Change is given only on coins.
Additionally, in order to make topping up of cards in vending machines even easier, 37 of them also accept payment cards. Vending machine locations.

Other than extending the validity of season tickets, all tickets available for sale can also be purchased from the vending machines.

The Krakow City Card system was launched within the framework of EU IRDOP, whose independent beneficiary was Miejskie Przedsiębiorstwo Komunikacyjne S.A. (Municipal Transport Company) in Krakow. The KKM system includes 62 vending machines, 300 thousand cards and 80 readers for controlling those. The purchase cost of all the equipment amounted to PLN 9.2 million. As much as 75 per cent of the project value has been financed with EU funds, while the remaining 25 per cent has been paid by MPK S.A.