Welcome visit by the U.S. Consul General B. Bix Aliu

On August 24 Mayor of Kraków Jacek Majchrowski welcomed in his office Mr. B. Bix Aliu, the new U.S. Consul General in Kraków.

It was Conul General's first visit at the Kraków City Hall but not the first in Kraków. 15 years earlier Mr. Aliu served as a Vice-Consul and Deputy Cultural Attaché at the U.S. Embassy in Warsaw. His most recent assignment was as the Deputy Chief of Mission of the U.S. Embassy in Montenegro, where he often served as Charge d’Affaires, ad interim.

Consul Aliu mentioned the changes he noticed in Kraków since his last visit - a visibly greater number of tourists but also striking care for cleanliness in comparison to other European cities. Besides the customary exchange of courtesies the Mayor and the Consul talked about the upcoming municiapal elections, the complex issue of air pollution and measurement methods as well as solutions implemented in Kraków, but also about the changes and cleavages affecting societies nowadays, not only in Europe. Mr. Aliu expressed his interest in the situation on the job market in Kraków and was impressed to hear that almost 70 thousand are employed by the outsourcing sector alone.

Mr. Aliu was glad to accept new responibilities and is looking forward to cooperating with the Municipality of Kraków as well as to the arrival in Poland of the new U.S. Ambassador to Poland Ms. Georgette Mosbacher, a businesswoman whose main objective, according to Mr. Aliu, will be to increase the number of American investments in Poland. 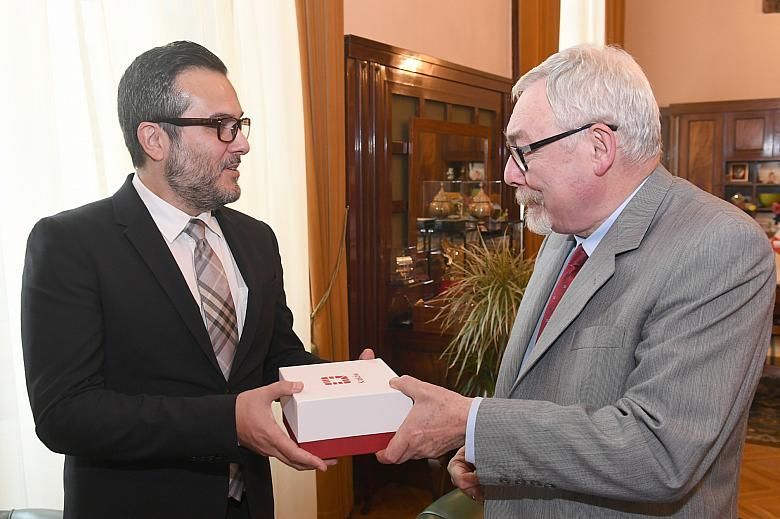