Krakow round the table

The Michelin Rouge Main Cities of Europe Guide so far only contains two Polish cities: Warsaw and Krakow enjoy recommendations for their restaurants – every year the numbers are closer. And while the current capital naturally attracts the attention of the world, what can explain the phenomenon of Krakow? 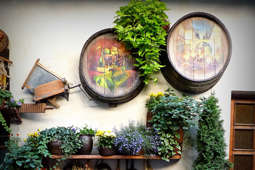 It is the capital of Małopolska that attracts veritable pilgrimages from all directions: Here the concentration of restaurants in a small space is unmatched in this part of Europe – but also in Krakow feasting outside the home is deeply anchored in local traditions, historically the custom of the former Imperial and Royal Galicia. Even earlier – it is here, with the court of Queen Bona, that innovations in 16th-century European cuisine were brought to Poland. It is from Krakow that the unique bagels come, famous since the Middle Ages, and in 2010 listed as a protected product. From the mountains of Małopolska come bundz and sheep cheese – the tastiest Polish contribution to the European tradition of cheese-making. Among the dozens of Polish culinary brands protected by the European Union, a quarter come from Galicia, from Zator carp to Lisiecka sausage: in the Kingdom of Polish cuisine, Krakow and Małopolska feature prominently.

Many regional dishes can be tasted in June during the Festival of Małopolska Flavours, combined with the Bread Festival. And there is still the Krakow Pierogi Festival, and numerous restaurants here serve the local cult maczanka po krakowsku.

The Renaissance of Polish cuisine

Regional cuisine, also called peasant, stodgy and fat – has a large group of followers. It is a kingdom of pierogi and dripping, thick slices of dark bread and thick sauces. Omnipresent in eateries and bars, its dishes you can also taste it in good restaurants, in a more subtle version: Pod Baranem (including the still rare in these parts of Europe gluten-free variety) or at Jarema (here the attention is on the tradition of the eastern Polish borderlands). For solid Galician cuisine try the Kompania kuflowa Pod Wawelem.

Many Polish restaurants strive with their decor and menu to refer to the rich history of the city: Wierzynek recalls the monarchs who more than 600 years ago came to Krakow for a sumptuous feast. The names Wesele or Kawaleria, and even Pod Aniołami speak for themselves, although the menu items also reveal Mediterranean influences and ingredients. A passion for wild mushrooms and game we have in common: As shown by Miód Malina or Wentzl – places totally Polish, and yet enjoying a full understanding from visitors. Similarly Szara Kazimierz – famous for its many versions of beef tenderloin, offers a range between classic Polish dishes and Bouillabaisse.

The restaurants run by famous chefs – Adam Chrząstowski (Ed Red) and Rafał Targosz (Hotel Unicus) – also provide familiar accents. In contrast to the followers of modern Polish cuisine – grown from native traditions while eagerly seeking the world heritage of cooking techniques – are the chefs of the three hotel restaurants of the LHR network: Pod Roza, Copernicus,and Trzy Rybki. Of completely European character – although not without local accents – are places like Szara or Studio Qulinarne – the creators of their original menus have set themselves no geographical limits. None of these places have long menus: on the contrary, the carefully thought-out menus contain a few suggestions for starters, main courses and desserts.

From Italy to the New World

Krakow's restaurants are tempting with their suggestions for cuisines from many nations - with particular emphasis on Italian cuisine. Restaurants such as Del Papa, Da Pietro and La Campana, as well as numerous smaller trattorias here have gained regulars, but many interesting places – smaller and larger, often run by native Italians – have found their place a little further from the centre – in Kazimierz (Al Dente) or at distant Rondo Mateczne (Pomodorino). Near Krakow's Main Market Square, Farina tempts with its Mediterranean menu, and Cyrano de Bergerac recommends French quiche. To eat great sushi or tempura, you should go to Kazimierz – to Edo. Those who prefer Mexican cuisine find Manzana (serving also gluten-free food) on the opposite side of the street.

Over a cup of coffee

At the time of Art Nouveau – in Krakow known as Young Poland – in the city's cafes artistic manifestos were forged, cabarets emerged, scandals unfolded, from which later the city seethed. Traditional coffee shops – similar to the places you can find from Prague and Vienna to Barcelona – operate today, even in the Main Market Square: this tradition is cultivated in Europejska, in the Pod Krzysztofory Palace. But Krakow has also developed its own type of cafe, often with an artistic flair. Cafe Camelot in Doubting Thomas Street, right by the Main Square, or a little further, on the Planty by the contemporary art gallery, the glazed Bunkier are popular meeting places. Nearby, on Szczepański Square, a few interesting locations have appeared, including the fashionable Bomba or the recently opened branch of Warsaw's cult Charlotte: A combination cafe with a bakery, which immediately met the taste of Cracovians. Equally well known is the custom of breakfast at Skrzynka Smaku – more a winery than a cafe, but in Krakow's Dębniki attracting a sizeable regular clientele.

Many venues in Kazimierz cultivate Jewish traditions – visible everywhere in the buildings around – and serve snacks, but also concerts and exhibitions. Its opposite is the nearby Nowy Square, where – along with many clubs playing day and night – you'll find Les Couleurs and Moment – both places open from the morning, where you can check your e-mail and eat something tasty. Interesting places can also be found in the area of Wolnica Square, as well as on the Vistula – in the literal sense, on board the barge Alrina – and across the Vistula, in Podgórze: in Cawa, set up here even before the Bernatka Footbridge.

These are just some of the things worth visiting on the culinary map of Krakow. In fact, there is a high standard of food and service in many more restaurants: There is a lot to discover in Krakow also from this side. You may find useful the comments of Michelin inspectors (www.viamichelin.com) and the Recommendation for Krakow Restaurants Campaign, conducted for several years, which has selected nearly 150 venues to visit. A list of these locations can be found in special guide - download here