‘I am lucky to live where others can only visit for a short time’ is the motto of  "A Sustainable Tourism Policy for Kraków in the Years 2021-2028", a document adopted by the Kraków City Council on March 24 this year, which serves to develop an optimal tourism management model in Kraków after the decline caused by COVID-19.

In 2021, which is a very tough year for the industry, Kraków boldly implements the ideas of sustainable tourism, aimed at achieving effective co-management of the city and tourism reactivation in the spirit of harmonious coexistence to reconcile the interests of residents, entrepreneurs and visitors. At the same time, ideas will help to strengthen the brand of Kraków as a historical city that properly cares for its unique heritage. The most important thing is to find a happy medium between the sense of comfort and the appropriate quality of life of residents, the expectations of entrepreneurs from the broadly understood tourism sector, and visitors’ needs. Sustainable tourism is a shared responsibility.

“A Sustainable Tourism Policy for Kraków in the Years 2021-2028” clearly states that the objectives of the city's tourism policy are both economic and social. Therefore, it is necessary to create conditions for increasing the competitiveness of tourist entrepreneurs, but also to reduce the level of inhabitants’ annoyance. The city therefore has a supporting, promoting, but also conciliating and regulating role to play. Entrepreneurs, on the other hand, are the initiator of projects that maintain development of the city's tourism economy. The coming year’s priority will be to reactivate the tourist traffic that has survived the collapse caused by the COVID-19 pandemic. However, it is necessary to ensure that the actions taken are implemented through dialogue and partnership and that all participants of the tourist market are aware that Krakow with its genius loci is a shared spaced, and that it is important to maintain balance and harmony between the needs of residents, entrepreneurs and tourists.

In 2019, Kraków was visited by over 14 million visitors. Back then, the concept of tourism hypertrophy, also known as over-tourism or simply excessive tourist traffic, was on everybody's lips. It was also said that Kraków has become a victim of its own success, because the growing number of visitors and the income from tourism, which reached PLN 7.5 billion, was accompanied by negative phenomena, such as displacement of residents from the city centre caused by rapid development of the short-term rental services market. Therefore, in 2019 the concept and outline of the document “A Sustainable Tourism Policy for Kraków in the Years 2021-2028” was developed.

The year 2020 brought a slump in the tourist market. The number of visitors to Krakow fell to less than 9,5 million, and the revenues amounted to PLN 4.5 billion. The beginning of 2021, due to the difficult epidemic situation and numerous restrictions imposed on restaurateurs, hoteliers and other entrepreneurs from the tourism sector, was equally difficult. At that time, further work and public consultations were carried out on the “A Sustainable Tourism Policy for Kraków in the Years 2021-2028”, and in March 2021, the Kraków City Council officially introduced the Policy. This decision was accompanied by a belief that in such a critical moment the idea of sustainable tourism must not be abandoned, as it can be an optimal and profitable solution for the future of Kraków. It is worth emphasising that sustainable urban tourism is understood as the level of tourist traffic that provides benefits to the city and the local community, but at the same time does not harm its cultural heritage or the natural environment.

‘To effectively implement "A Sustainable Tourism Policy for Kraków in the Years 2021-2028", cooperation between various stakeholder groups, including entrepreneurs, will be critical. The role of the inhabitants is also indispensable. They are beneficiaries of the tourism economy, but on the other hand, are negatively affected by annoying tourist traffic when its level is excessive. Therefore, the aspect of social responsibility is important in this respect, and thus reaching a compromise between the concerned parties’ – says the Mayor of the City of Kraków, Jacek Majchrowski. ‘I am also convinced that this is the optimal moment to adopt this document, as it allows the City to be prepared for future challenges. Although the years 2020-2021 have been difficult for Kraków, tourists will return and people will be very thirsty for sightseeing. It is good that we have developed solutions that will also translate into greater comfort and safety for tourists in the future’ – adds the President.

A similar approach to the topic of sustainable tourism has been taken by other historical cities, including those with which Kraków cooperates under the international URBACT III Program and the Tourism-Friendly Cities network of partner cities.

‘Due to the pandemic, Dubrovnik, like all tourist cities in the world, crossed the path from facing the challenge of an excessive number of guests to the lack of guests. This situation has been one of the biggest challenge for TOURISM FRIENDLY CITIES so far. But we in Dubrovnik see it as an opportunity for a new beginning. I believe that we will get out of this situation quickly and successfully, but also wiser for the future. This time with some new rules and thinking even harder about sustainable tourism, which is now even more clearly set as a goal for our future development’ – says Mato Frankovic, Mayor of Dubrovnik.

‘It's refreshing to see how Kraków thinks about its future tourism policies, transitioning to a model of sustainable tourism. Since 2019, Kraków's work in the European URBACT Tourism-friendly Cities network has shown a focus towards balancing residents quality of life with encouraging the consolidation of cultural tourism, while also advocating for a coherent COVID-19 pandemic recovery plan for the industry.’ – adds Anamaria Vrabie, Lead Expert of the URBACT Program for the Tourism-Friendly Cities network.

“A Sustainable Tourism Policy for Kraków in the Years 2021-2028” does not provide ready-made answers to all problems, but it creates a framework that allows for the implementation of more detailed ‘tailor-made’ solutions. Importantly, these activities are not to be implemented only by the city authorities, but bottom-up, through the initiative of interested entities. It is also important that the Policy, both with its approach and timeframe, fits into the new EU financial perspective, which will probably allow the city and its partners to implement many interesting projects.

‘The presented document is modern and comprehensive. The diagnosis included accurately captured also the existing problems, and in our opinion, the proposed recommendations indicated the correct actions to overcome these problems’ – says Rafał Szlachta, President of the Polish Tourism Organisation.

And what recommendations are included in the document? The recommendations cover nine areas where some interventions are needed or suggested (the full names of the recommendation areas are listed in the graphic). In each area, exemplary actions were recommended. So, for example, the city will support the marketing of entrepreneurs depending on their individual needs aimed at reactivating sales channels. On the other hand, managing the night economy requires appropriate stimulation of the tourists’ behaviour that would be in line with the ‘Respect Kraków’ initiative as well as the commitment of entrepreneurs in promoting the social responsibility of business.

‘The Kraków sustainable tourism policy that has been developed is a diagnosis, a set of propositions and recommendations describing the conditions that must be met by the city, the entrepreneurs and the residents to reactivate tourism in a sustainable way, not only the tourism economy itself and its size in the coming years’ – explains Dr. Bartłomiej Walas, author of the concept and the document.

It is not, however, that the City gives up on problems that result from globalisation and are difficult to solve, as shown by numerous examples of other European metropolises. As far as the short-term rental issue is concerned, Kraków is active on the international arena (cooperation amongst a group of 20 European cities, including Amsterdam, Vienna, Dubrovnik) and calls for participation in the legislative process both at the national and international level.

Obviously, in order for the ambitious assumptions adopted in the “Sustainable Tourism Policy for Kraków in the Years 2021-2028” to be realised in the coming years, cooperation of all parties related to the tourism sector is necessary: entrepreneurs, self-governments, universities, and most importantly, residents. Some joint activities for Kraków's sustainable tourism are already initiated and implemented in the process of the document operationalisation. 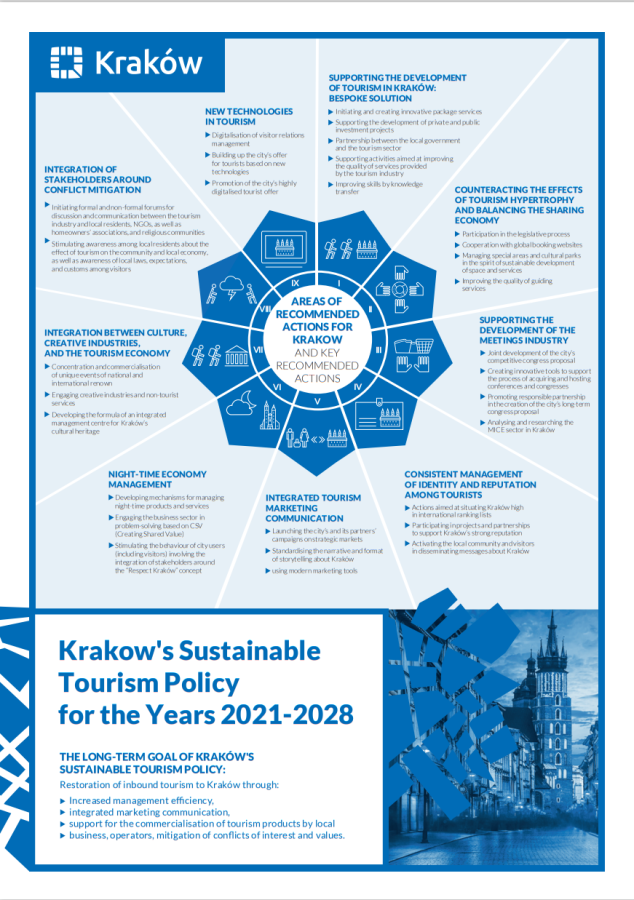 National Day of the Republic of Malta

Krakow speaks out against discrimination of LGBT+ community