On 8 July 2022, US Ambassador H.E. Mark Brzezinski paid his first official visit to the President of Kraków. He was accompanied by the US Consul General in Kraków Patrick Slowinski.

Ambassador Brzezinski visited our city on the occasion of the celebration of the 246th anniversary of the restoration of American independence and the farewell to Consul Slowinski, whose mission in Kraków has come to an end. Thanking him for his good cooperation, President Majchrowski presented the Consul with a Honoris Gratia medal.

Ambassador Mark Brzezinski - in Poland since December 2021 - is the son of Zbigniew Brzezinski, national security advisor to American presidents, political scientist and diplomat and Honorary Citizen of Kraków. The ambassador mentioned that his father, despite his position in American politics, always felt that he was above all Polish. He made his decisions and actions out of concern for the welfare of his native country. And Ambasador Mark Brzezinski, during his university days, participated in a Fulbright Foreign Student program in Kraków. He noted that since that time - the 1990s - Kraków has changed a lot, although at the same time, thanks to its impressive monuments, it has regained its charm. Ambassador Brzezinski believes that student exchanges under various programmes, particularly the Kosciuszko Foundation, which still bring important experiences to their participants today, are still invaluable. 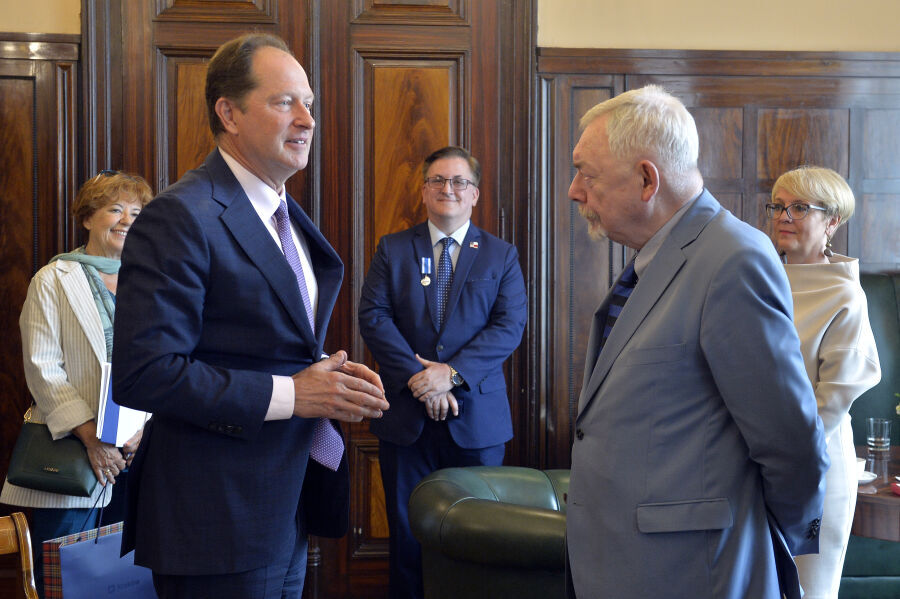 It is especially valuable when political leaders are involved in such international projects. The Ambassador emphasised that as he walked around Kraków before the meeting and heard many languages from all over the world, he became convinced that this unique city deservedly enjoys international fame as one of Poland's symbols. American soldiers stationed in Poland often visit Kraków in their free time, thus gaining the most valuable image of the country in which they serve their mission. When the US Ambassador meets US soldiers in Poland, they all admit that they feel comfortable in our country and appreciate the hospitality of the Polich people.

Polish family ties mean that the Ambassador treats his mission in Poland as a personal calling. Although the current times are uncertain and cause concern due to the unpredictability of the Russian president and the actions of the aggressor army right on the Polish border, the ambassador admits with satisfaction that Poland's image in the world has changed considerably. Recognition of our country as a humanitarian power also has tangible effects: it results in increased business and cultural contacts and a strengthening of its international position. It is economic cooperation and the power of business that provides the opportunity for the country's prosperity that is essential for the security of the state and its citizens.