Epidemic diseases and their reminders in the City of Leuven

A few places in Leuven remind us of the fact that there have been epidemics in the city:

At the municipal cemetry there is a monument to remember the Leuven victims of the 19th- century cholera epidemic.  It’s a cast-iron cross with the names of streets who were most effected.

In the 19th century  there were several large outbreaks of cholera epidemics in Europe. Cholera is an infectious bacterial disease caused by a bacterium that was transmitted through contaminated water.

Characteristics are: vomiting, an explosive diarrhea and dehydratation.  Today, properly treated, most of the patients do recover. But in the 19th century there was a very high mortality rate (almost 50% died).  The cause was unknown for a long time and the so-called "blue death" (from the disease the skin got a strange blue color) has been compared with the “black death” (the plague) in the past centuries.

In Leuven the 3 great cholera epidemics caused about 1000 deaths.  The worst year was 1849 with 577 victimes.  Mostly in the poor, densely populated neighbourhoods around the small river "de Voer", which was during the summer an open sewer.

The memorial was placed 150 years after the first epidemic and exudes simplicity: an earthen tumulus with metal crosses, like they use to place on humble, ordinary people’s graves. The names of the deceased were written with paint: soon the names became unreadably, due  to the rain showers.

The design of the monument strengthenses the charges on the corresponding sign: "the deadly victims were eminently poor people, from who the individual personality was found ‘unimportant’". 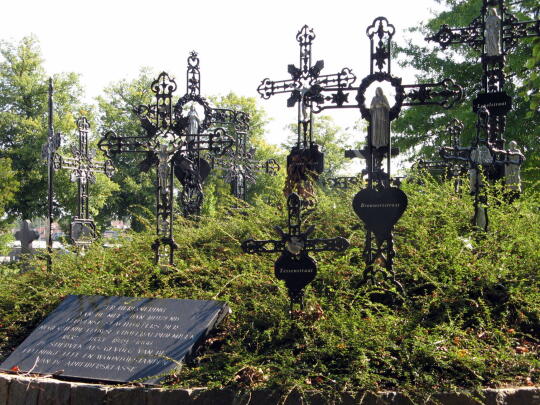 Here you can find the painting "The plague procession to Bas-Wavre".   This procession took place fort he first time in 1651.  That year there was a plague epidemic in Leuven.  The priest of the Saint-Quentin’s Church, father Buyckx, was one of the first victims.  After he had prayed to Our Lady of Neerwaver he was healed and his parish would have suffered less compared to other parishes. A miracle! In return the parish started with a yearly procession, which was organised on the 5th Sunday after Easter. 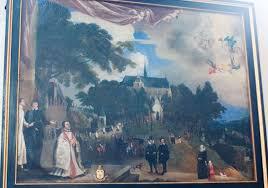 Plaque at the house in Schapenstraat

Close to the Saint-Quentin’s  Church, in the Schaapenstraat, you can find a large house, built in order of the ladies Maria and Margerita La Mistan of Neerwaver. On the house is a plaque with a reliquary of Our Lady of Neerwaver.  Below you, can read the inscription: "van de pest, oorlog en dieren tyd – verlos ons Maria van Pys" (From the plague, war and hard times, free us Maria van Pys). 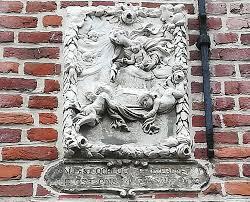 Nowadays there is a school.  But in the Middle Ages there was a hospital for lepers. It was definitively founded by Hendrik I, duc of Brabant and it was close to Leuven, outside the Brusselse Poort (gate to Brussels).   According tos ome historians the hospital already existed in 1197. There worked: 9 friars, 9 nuns, and as determinated by Pope Honorius III in is letter from Januari 20, 1223, the abbot of Villers was their spiritual director and leader.

At the beginning of the year 1300 the friars left Terbank and only the nuns remained. In 1578 the monastry was burned down by Burgundian soldiers who fought under Jan from Austria.

In 1604 the nuns could return tot he monastry but, once again, in 1635, there was a lot of dammage due to the Siege of the city of Leuven.  At the middle of the 17th century, the monastry was rebuilt. But April 26, 1783, the priory of Terbank was abolished by emperor Josef II. The monastry was sold, on January 22, 1787 and a little later the church was demolished.

The Cellebroeders (Cellfriars) appeared in Leuven in 1345 and they lived in a few cells. Hence their name ‘Cellebroeders’ or Cellfriars. They were working at the Saint-Jacobs’  parish and they had a triple task: take care of the plague victims, receive people who suffer from mental illness and bury the dead.

The city council paid them for  their work. Over time you could find the Cellfriars all around the Roman-German empire.  In 1458 their concregation was officialy recognized by Pope Pius II.

The Cellfriars burried all the dead from the Black Death in 1578.  The city gave their authorization to burry the dead at the municipal cemetries, so not only at the cemetry arround Saint-Jacobs’ Church.

You could identify the Cellfriars by their black habit.  They also burried the dead pilgrims who did of the plague in the pilgrims’ house in Winksele. 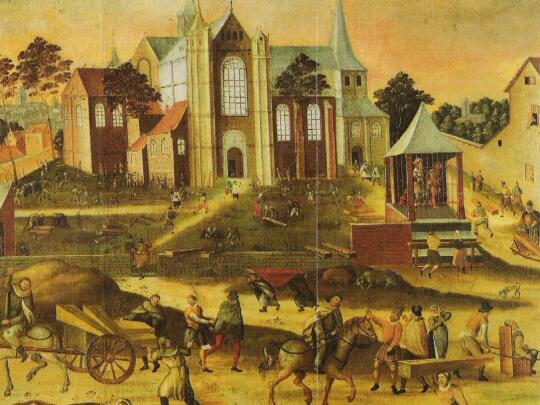 Cellfriars are burying the dead close to the Saint-Jacob’s Church.  They died during the plague-epidemic in the 16th century.