Wawel is a fortified architectural complex erected over many centuries atop a limestone outcrop on the left bank of the Vistula river in Kraków, Poland, at an altitude of 228 metres above sea level. 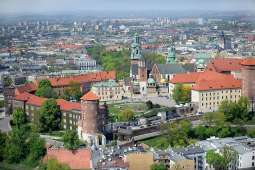 The complex consists of many buildings and fortifications; the largest and best known of these are the Royal Castle and the Wawel Cathedral (which is the Basilica of St Stanisław and St Wacław). Some of Wawel's oldest stone buildings, such as the Rotunda of the Virgin Mary can be dated to 970AD. There are also wooden parts of the complex which date to about the 9th century. The castle itself has been described as "one of the most fascinating of all European castles."