Our tour begins at the Royal Archcathedral Basilica of SS Stanislaus and Wenceslaus, i.e. the Wawel Cathedral, which was repeatedly expanded and rebuilt, mainly between the 12th and 14th centuries. 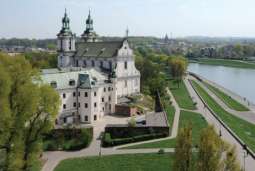 In the reign of King Bolesław the Great (beginning of the 11th century) there used to be a Romanesque cathedral on the site; it was later replaced in the times of Władysław I Herman. The Wawel Cathedral served as a coronation and burial site for Polish kings. It also contains the graves of meritorious Poles: Adam Mickiewicz, Tadeusz Kościuszko, Józef Piłsudski, Juliusz Słowacki and Władysław Sikorski. One of the towers of the cathedral contains the Royal Sigismund Bell. The nave of the cathedral features a silver sarcophagus of St. Stanislaus, a bishop.

Descending the Wawel Hill, we encounter Church of St. Bernard Of Sienna, erected in the 15th century and destroyed in the 17th century by the Swedes, after which it was rebuilt in the Baroque style. Moving down Bernardyńska Street, we reach the Vistula Boulevards. Following the river's current, on the other side of the former riverbed (presently Dietla Street), stands the Baroque Church of SS Michael and Stanislaus and the monastic complex of the Pauline Order on Skałka (the present buildings come from the 17th and 18th centuries). It is thought that on this site Bishop Stanislaus of Szczepanów was killed by King Bolesław II the Generous in 1079. The crypt contains tombs of meritorious Poles, such as Jan Długosz, Jacek Malczewski, Wincenty Pol, Karol Szymanowski and Czesław Miłosz.

The next point on the route is St. Catherine's Church (1342), erected for the Augustines, who were brought here from Prague. It constitutes a pure example of the Gothic architecture in Kraków.

We continue down Augustiańska and Skawińska streets towards Krakowska Street, where we can see the house of Our God's Brother Albert and the Baroque Church and monastery of the Brothers Hospitallers of Saint John of God on the opposite side of the street. We continue into Wolnica Square, the former market square of Kazimierz, from the times when it was a town of its own. On the north-east, we can see the impressive Corpus Christi Church, built in the 14th century, along with the monastery of the Canons Regular of the Lateran. The building that stands in the middle is the old town hall from the 18th century, which currently houses the Ethnographic Museum.