The eastern part of Kraków used to be inhabited by the Jewish diaspora. To this day, Kazimierz district has many monuments, especially religious ones. 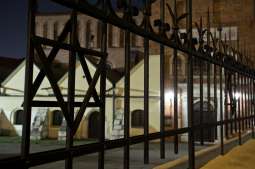 The trail begins by the Center for Jewish Culture on Meiselsa Street – a robust cultural centre. Next, we move towards Jewish temples. The Tempel Synagogue (Miodowa Street) was built in 1862 for the Society of the Progressive Israelites. After a look at the 17th-century Kupa Synagogue on Warszauera Street, we reach Isaac Synagogue on Jakuba Street, between 1638 and 1644. On Józefa Street, we can see the tallest synagogue in Kraków, the so-called High Synagogue, erected in 1590.

The highlight of the trail is Szeroka Street with its three temples, the most valuable of which is the Old Synagogue – the oldest Jewish structure in Poland (15th century), which currently houses a branch of the Historical Museum of Kraków with its exhibition devoted to the history and culture of Kraków Jews. Next to the Renaissance synagogue called Rema (1557), is a historical Jewish cemetery from 1511. After visiting Wolf Popper Synagogue (1620), we continue beyond the borders of historical Kazimierz to the New Jewish Cemetery at 55 Miodowa Street.