Our website uses cookies, as almost all websites do, to help provide you with the best experience we can.
MAGICZNY KRAKÓW
Play the Bugle Call

A souvenir from Krakow

"Play the Bugle Call" mobile application was created for Polish and international tourists visiting Krakow. Anyone who downloads the app can feel like a Krakow bugler and, when leaving the city, take this special tune home – all it takes to play it is to blow in the microphone on the phone. The app allows installation of the bugle call as a ringtone and related graphics as a wallpaper. It is compatible with three operating systems: Android, iOS and Windows Phone.

"Play the Bugle Call" can be downloaded from application stores. Optionally, each visitor can scan a QR code with app link from special posts located right next to St. Mary's Basilica (the bugle call is played from one of its towers), from posters and stickers on municipal transport stops, at InfoKrakow points as well as restaurants, pubs and hotels situated around the Main Market Square in Krakow. "Play the Bugle Call" app is also promoted at sea by the ORP Krakow ship by materials with  QR codes placed there.

History of the Krakow bugle call by Leszek Mazan

The Krakow bugle call, or reveille, has been played at the hight of 54 meters four times every hour and every day for over six hundred years from the taller tower of the mediaeval St. Mary's Church. The tune reached Krakow from Hungary. The municipal guardian used to sound the golden bugle as a warning call, a wake up and good night signal and to herald the opening and closing of the city gates, ensuring the city of his vigilance. Legend has it that in 1241 the bugler's throat was pierced bya deadly arrow shot by a Tartar bow. Since then the tune stops in mid-note. For the last 140 years the melody has been played by officers of the municipal fire department. There are seven buglers, referred to by the citizens of Krakow as "The Magnificent Seven". Each time they sound their bugle in a different direction: first, facing the Wawel castle (in honour of His Majesty the King), next in honour of the Mayor of the City, then for the visitors and, finally, in the direction of their commander's heardquarters. St. Mary's bugle call is a musical symbol of Poland and Krakow. Since 1927 Polish Radio has transmitted this sky-high concert daily at noon. The bugle call is the oldest permanent radio broadcast in the world. It has been played in royal and presidential pala ces in almost all capital cities around the world. It reminds all visitors that a wide open gate is featured in Krakow's coat of arms. 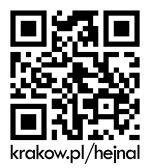 Low-speed electric vehicles in the Old Town
The City of Krakow cares for constant improvement of the quality standards of the public space in the historical center and the safety of tourists. From 2018, regulations concerning transport provided using low-speed electric vehicles became applicable. These services in the Old Town can only be provided using vehicles with a fixed color scheme (body in dark beige color, and other elements in black or transparent) for which the identifiers (ID) were issued. The ID in the form of a rectangular sticker with a burgundy border, are placed in the lower right corner of the vehicle's windshield, give the name of the company and vehicle identification number, and are protected against forgery with a special hologram.

Edinburgh welcomes rising star of polish literature
The winner of the Lord Provost’s International Residency has been announced as Ahsan Ridha Hassan from Krakow City of Literature.

Welcome to Poland
Info package for foreigners living in Krakow includes the most important information, which a foreigner staying in the territory of Poland should be familiar with.

Kraków mobile application
Krakow now has its very own mobile app! myKRK is Krakow's first official application addressed to all users of Android phones. The up-to-date urban guide can be downloaded and installed for free at the Google Play store or at Krakow's website.
PUBLIC INFORMATION BULLETIN
OF THE CITY OF KRAKÓW
Places to go
What? Where? When?
For tourists