Krakow can boast multi-century tradition of creative co-existence for two cultures, the Christian and the Jewish one. A tradition which – despite painful moments in the history of Krakow Jews – remains alive and contributes to the unique atmosphere of our city. 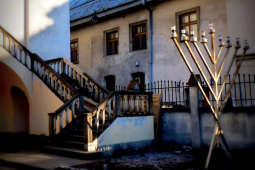 Jews arrived in Krakow already in the first half of the 11th century, most probably from Prague. They promptly became a significant group for the city – their trading skills were used by regular city dwellers while rulers of the Wawel settlement (among them Ludwik I, queen Jadwiga, Władysław Jagiełło and Casimir IV) did not shun away from... taking out loans with Jewish merchants. Actually, contacts between the royal court and the Krakow Jewish community were not limited to the sphere of finance, only to mention the fiery affection between king Casimir the Great and the beautiful Esterka[1]...

The transfer, in late 15th century, of the Jewish settlement from Krakow to Kazimierz marked the beginning of over 150 years of the Krakow Jews' "golden age". Still before the year 1500 the first synagogue (known as the Old Synagogue today) was constructed, being the oldest preserved Jewish temple in Polish territory, while Jewish merchants were awarded numerous trading privileges. It was exactly this period in the history of Krakow (and all of Poland) that was referred to by rabbi Moses Isserles as paradis Judaeorum, the Jewish paradise. 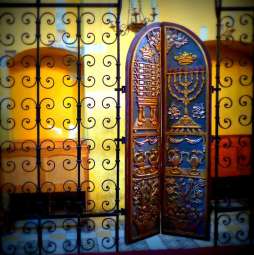 Despite difficult moments in the history of our country, such as the "Swedish deluge" or the partition period, the Krakow Jewish community survived until the era of independent Poland and regained its significance in the interwar period. At the time, Krakow was a city of tolerance and co-existence by Poles and Jews – in 1939 over 60 thousand Jews lived here, while their Krakow community was the fourth most numerous in Poland. The peaceful co-existence was broken by the beginning of the Second World War.

For the Jewish residents of Krakow, war time was marked by repression by the Nazi occupier. In 1940, 3/4 of the Jews became subject to compulsory expulsion and only a year later the remaining 17 thousand people were relocated to the specifically assigned ghetto territory, where previously only 3 thousand Poles had lived – according to calculations, barely 2 m2 were envisaged per person. Already in 1942, 2/3 of the inhabitants of the ghetto were transported to concentration camps while the remainder were relocated in March 1943 to the newly established forced labour camp in Płaszów, where many of them lost their lives. Those who survived were sent to extermination camps. 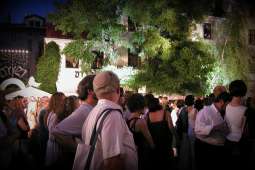 It is estimated that only 3 thousand Krakow Jews survived the Holocaust, with a thousand of them having been saved by the German entrepreneur Oskar Schindler, whose story stemmed Thomas Keneally's novel titled "Schindler's List", followed by the film under the same title, directed by Steven Spielberg. Many people were aided by Tadeusz Pankiewicz, the owner of the Pod Orłem [Under the Eagle] Pharmacy located within the territory of the Krakow ghetto, as well as by tens of other residents of the city. After the war, most of the survivors emigrated to the USA or Palestine and only after 1989 some of them returned to Krakow.

Among others, the March of the Living (organised every March, on the anniversary of the liquidation of the ghetto) and the permanent exhibition titled "Krakow. Time of Occupation 1939 – 1945" at the Schindler Factory (branch of the Historical Museum of the City of Krakow) have become symbols of remembrance of the painful past. In March of this year a new exhibition, devoted to the history of the ghetto, will also be opened at the former Under the Eagle Pharmacy.

But the contemporary Jewish Krakow means also Kazimierz, bursting with cultural life, where in numerous cafes and bars, music – often played live – sounds until the very latest hours of the night. Likewise, it stands for the Jewish Culture Festival, attracting performers and participants from all over the world.

Come and get to know the history, culture and tradition of Jewish Krakow.

[1] Esterka: Jewish woman famous for her beauty. According to chronicler Jan Długosz, king Casimir the Great's lover, with whom he had two sons.