Kazimierz, in Kraków, is a special place developed over many centuries as a Christian-Jewish neighbourhood. Jews arrived here in the mid-14th century, and until the early 19th century they lived in a separate “Jewish city”, enclosed by today’s Miodowa, św. Wawrzyńca, Wąska, Józefa, and Bożego Ciała streets. It was an autonomous enclave governed by internal Jewish authorities: their only sovereign was the king in whose name the Voivode of Kraków exercised authority over the enclave. 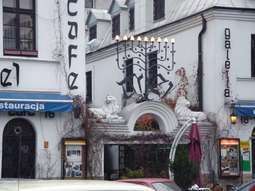 At the close of the 19th and early in the 20th centuries, Jews gradually began to take over the whole of Kazimierz and the neighbouring Stradom district. Moreover, from the late 19th century onwards, Jews actively participated in the development of this section of the city as developers, builders, and architects. Their social and economic activity started in the 1860s after they were granted equal civil rights. This made the Jewish intelligentsia more enthusiastic about cultural assimilation and prompted decisions to move their homes outside Kazimierz.

Before the Second World War, Kraków’s Jewish population of 64,000 accounted for every fourth person in the city. By 1939 the minority had created and developed a social infrastructure capable of furthering their interests and aspirations. It was mostly built up in Kazimierz, which between the two world wars remained a predominantly Jewish district and a natural community resource for the majority of Jewish organisations and institutions. Political parties and factions of all hues were active there representing the Jewish people in the Polish parliament, while educational, charity, cultural, artistic, and sports organisations were active as well. Moreover, Kazimierz was a focus for the religious life of Kraków’s Jews. They prayed in six major Orthodox synagogues (Old Synagogue [Alte Shul], Remuh, High, Isaac, Popper, and Kupa), and in the progressive synagogue (Tempel). These were maintained by the Jewish community, yet there were also many houses of prayer which belonged to assorted religious associations and private individuals.

Today Kazimierz is one of the best known areas of Kraków. Teeming with cultural and artistic life, the district especially attracts those who want to feel the spirit of Kraków’s bohemians. The most popular cafés as well as established artistic studios and galleries cluster around Szeroka, Izaaka, Miodowa, Józefa and Podbrzezie streets, and around Nowy (Żydowski) square. It would, however, be hard to draft a complete list of pubs, cafés, and restaurants worth visiting as each of these has its unique character and decor, and in Kraków’s Kazimierz one counts them in dozens.