Nowadays, in the era of free capital flow, Kraków has become an attractive place for locating many investments. Attractive areas, rich offer of the  property market, as well as developed sector of business services and scientific-and-research facilities are just some of the arguments in favour of selecting Kraków as a place for investments. Welcome to Kraków, a city where tradition meets modernity in full harmony, where the care for centuries-old heritage is accompanied by the development of modern technologies, and where the creative invention of people living and working here, the manifold opportunities for spending free time and Kraków's genius loci cause that it is a city for good living and work. 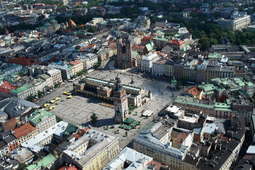 Economic centre of the region

Kraków is currently populated by about 760,000 permanent inhabitants, but every year it is also home to several dozen thousands of people residing temporarily in the City, mainly students. Kraków is the second largest city in Poland. It is not only the administrative centre of the Małopolska Region, but also a supra-regional scientific and economic centre and valuable partner for investors. The City houses offices of international brands, business support associations and chambers of commerce (e.g. Kraków British-Polish Chamber of Commerce, American Chamber of Commerce, Kraków Merchant Congregation and the Chamber of Industry and Commerce). Its position is confirmed by high ratings.
The economic importance of Kraków is reinforced by the demographic potential of the region, as about 8 million people live within a radius of 100 km of the City. This forms a receptive potential sales market. Another advantage is the fact that 60% of our City's population is comprised of people below the age of 45.

Kraków in the heart of Europe
The undisputed advantage of Kraków is its convenient geographic location at the crossing of important transportation routes. The City's transportation accessibility is constantly reinforced by the executed infrastructural investments. Comfortable and fast railway connection, for example, with Warsaw (2.5 h by express train) and the international airport with many domestic, European and pan-European flights are facts of great importance for the effective business operations. Car drive from the city centre to the airport takes up about 25 minutes, while the launched railway connection one can cover the distance in about 12 minutes.
The geographic proximity of developing markets in Ukraine or Russia provides a number of opportunities related to the export of goods to these markets, and the import in the other way: from the East to all countries in Europe and beyond.

Our potential consists of people
Kraków is a dynamic scientific centre. The number of universities and students, as well as the diversity of faculties constitutes an important meter of scientific potential. The intellectual potential of Kraków includes 24 universities, the number of people employed at universities amounts to 22,125 (including about 1,800 professors), and there are 209,100 students (number of students with those attending post-graduate, PhD and extramural studies). Kraków has a large number of qualified human resources for all modern sectors of economy and attracts investors in various branches of industry. Kraków is home to two largest Internet portals in Poland, ONET and INTERIA, as well as many providers of network services. It is in Kraków that Comarch SA, one of the most dynamic Polish companies of the IT sector was established.
Our students not only are broadly educated but, what is even more important, are fluent in foreign languages. Kraków is home, for example, to the European College comprised of the International Primary School, the European Private Secondary School (authorised to offer the International Baccalaureate Programme) and the European Private Middle School. In addition, many secondary schools offer two-language programmes where studies in selected subjects are run in a foreign language.
Apart from many language schools, Kraków has many organisations whose goal is to promote the culture of other countries, to teach the language and to promote their cultural output (e.g. the Spanish, Italian, German and Austrian institutes, and the Manggha Centre of Japanese Art and Technology). Good relations between the City Hall and these organisations can make it easier for the investor to recruit people familiar, for example, with the languages of Central and Eastern European countries.

City of modern economy
Numerous scientific and research units working for the modern industry, executed investments and qualified working force constitute advantages which cause that Kraków is perceived as the right place for running investment and economic activities. The City development strategy favours the involvement of cooperation of the broadest possible spectrum of entities, institutions and circles in the local investment-friendly initiatives, including promotional measures (at the level of the City, the neighbouring communes and the region). One of the vital factors of Kraków's investment attractiveness is the special economic zone that functions in our City and offers a number of investment incentives (www.sse.krakow.pl). There continues the development of conference facilities that enable the organisation of various meetings, rallies and symposia. A special congress bureau has been established, particularly to promote the City as an interesting place for business meetings, congresses and conferences, as well as motivational events.

Kraków after hours
The City's magic consists of the unique complex of architecture, art and culture (more than 25% of the resources of the Polish works of art is gathered in Kraków). Thanks to this heritage the City was honoured with the title of the European Capital of Culture in 2000. Today Kraków, the former capital of Poland, is one of the most important cultural and tourist centres of the country, and the seat to many cultural institutions, theatres, cinemas, museums and philharmonic that make life pleasant for the inhabitants and over 7 million tourists visiting our City every year. Nowhere in Poland could one find such a rich variety of cultural and artistic events: every year Kraków is host to over 40 festivals like the International Jewish Culture Festival, the Print Triennial, the Sacrum Profanum Festival and the International Short Film Festival. Every year the City hosts over 2,500 performances and concerts. Kraków is a special place that, like a magnet, attracts the people of culture and art who draw their inspiration from the atmosphere and rich past of the City; it is home, for example, to Wisława Szymborska, poet and Nobel Prize Winner, Sławomir Mrożek, writer, Krzysztof Penderecki, composer, Andrzej Wajda, director, Jerzy Nowosielski, painter, drawer and stage designer, and many other well-known and valued artists.
Kraków has many green areas that provide opportunities for recreation and active rest, including the Botanical Garden of the Jagiellonian University and the Zoological Garden in the Wolski forest complex which is a traditional place of recreation for the inhabitants. The rich and constantly expanded recreational base (ice rink, swimming pools, including the Aqua Park, tennis courts, and systematically expanded network of cycling paths) and other venues encourage people to practise sports and spend their time actively in the open air.