Church Of The Holy Trinity and Dominican Monastery 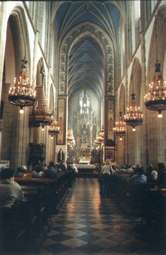 Situated at the Dominican Square and Stolarska Street. In 1221 Bishop Iwo Odrowąż brought Dominicans of Bologna to Kraków and entrusted them the Church of the Holy Trinity. At the site of this small Romanesque church the construction of a Gothic three-aisle basilica was completed in the 1st half of the 15th century. The stepped top of the facade is adorned with blends and stone coat of arms shields (reconstructed after 1850). The entrance to the church follows a neo-Gothic vestibule (1875) which houses an interesting portal dating back to the end of the 14th century with rich flora and fauna sculpted decorations.
In the 2nd half of the 14th century and in the 15th century family and guild chapels were erected along the side aisles and the presbytery to be later reconstructed in the 16th and 17th centuries. In the 17th century domed burial chapels were built for the Myszkowskis, the Lubomirskis, the Zbaraskis and St. Hyacinth. The last one was modelled after the Sigismund Chapel at Wawel, and belongs to the most remarkable works of art in Poland. It is decorated with stuccos of Baltazar Fontana (c.1700), polychrome of Karol Dankwart of Nysa (1701) and paintings by Tommaso Dolabella dating back to the 1st half of the 17th century. One should also note the Chapel of Our Lady of Rosary erected (1685-88) as a votive offering for the Vienna victory.
Adjacent to the church, there are monastery buildings concentrated around three viridaries-courtyards built from the 13th century. They include the Romanesque refectory with a portal decorated with plaiting and traces of polychrome and paintings of the 15th and 16th centuries, chapter house erected in the 2nd half of the 13th century and reconstructed in the 15th century with sculpted vault keystones, the building of the old wicket (13th century), and the old library (in the 19th century it housed St. Hyacinth Gymnasium). The Gothic cloisters of the first viridary preserved various monuments, tombstones, epitaph plaques, paintings depicting the history of the order and extraordinary gallery of sepulchral sculpture (16th to 18th century) whose origin varies starting from the 14th century.
The great fire of 1850 destroyed the church, the tower and a part of the monastery. The basilica was soon rebuilt, and its interior was reconstructed under the direction of Tomasz Żebrawski, an architect. The monastery was restored in the years 1894-98 under the direction of Zygmunt Hendel.