In the autumn of 1939, more than sixty thousand Jews lived in Kraków. On 18 May 1940, the German head of Krakow District, Otto Wächter, announced that only fifteen thousand Jewish workers with their families would be allowed to stay in Kraków from 15 August on. The rest of the Jews had to leave the city. 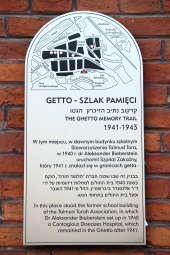 The leaving could choose a new place of residence and take along any personal property they still owned. For the compulsorily displaced, the Germans arranged a transit camp at Szlak Street. From there, they were escorted under guard to the main railway station.

On 3 March, 1941, all the Jews still legally living in Krakow were to move to the ‘Jewish residential quarter’ (or, ghetto). The German invaders arranged it in a portion of the district of Podgórze which had been vacated by its Christian residents, who had to abandon their houses, workshops, shops, and businesses. This was a peremptory decision. The removal had to take place before 20 March, 1941. Those who would not comply with the German order were threatened with compulsory displacement.

Several streets with 320 mostly two-storied houses were set apart to form the ghetto. The ghetto area, which had been hitherto inhabited by three thousand people, now had to accommodate about seventeen thousand residents. It was calculated that there were only two square metres of space per person.

Three Polish establishments remained within the ghetto, namely, the court and prison at Czarnieckiego Street, the Feliks Dziuba ‘Spectrum’ Optical Plant − working for the Wehrmacht – at Węgierska Street, and The Eagle Pharmacy of Tadeusz Pankiewicz at Zgody Square. From 21 March 1941, crossing the ghetto boundaries without a relevant pass was punished with severe penalties, while Poles harbouring Jews risked the confiscation of their flats.

From 15 October 1941, any Jews leaving the ghetto without the pass were punished with death. Death was also the penalty for the Poles who helped them. 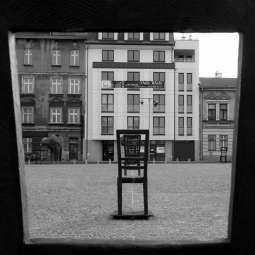 Initially, the ghetto area was demarcated with barbed wire entanglements. In the first days of April 1941, around the Jewish holiday of Passover, they were disassembled, and teams of Polish bricklayers began to construct a wall surrounding the ghetto. Some sections had natural boundaries in the form of limestone rocks called Krzemionki.

There were four gates leading into the ghetto. The main one (Gate no. I) occupied the full width of Limanowskiego Street between the building at no. 2 at the same street and the corner of the house at 1 Podgórski Market Square. Gate no. II was erected at the other end of Limanowskiego Street; no. III between the buildings at Lwowska and Józefińska streets; and no. IV – between Kącik Street and the corner house at the Zgody Square.

All of the Jewish offices which operated in the ghetto were established at the order of the Gestapo and as such they carried out its instructions and were controlled by it. The first of them was the Jewish Council (Judenrat), established already in September 1939 in order to function as an intermediary between the Jewish population and German authorities. It was responsible for a punctual and scrupulous execution of all the invaders’ orders and dispositions, distribution of the official food rations, and securing basic hygiene requirements for the residents of the ghetto. Another such office was the Jewish Order Service (Jüdischer Ordnungsdienst, commonly called OD), which was created in July 1940. It was charged with maintaining the order among the Jewish population. The Jewish Social Self-Help (Jüdische Soziale Selbsthilfe) established in May 1940 as a department of the Chief Social Welfare Council (NRO) provided help for the poor, children, and hospitals, organised charity kitchens and distributed assistance resources, while the tasks of the Labour Office (Arbeitsamt) included keeping the record of all the Jews living in the ghetto and, first of all, allocating permanent employment and forced labour. All the Jews aged fourteen or more were under the obligation to perform forced labour once a week. The work usually consisted in odd jobs such as snow removal in winter and scavenging the streets or maintaining the Planty Park and other green areas in summer. 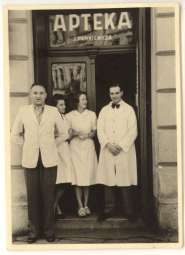 The only chemist’s shop in the ghetto was The Eagle Pharmacy at 18 Zgody Square, which was run by a Pole - Tadeusz Pankiewicz. His staff consisted of Irena Droździkowska, Helena Krywaniuk, and Aurelia Danek. As he himself recalled, Pankiewicz managed to obtain the German authorities’ consent to remain in the ghetto only thanks to bribes paid to the appropriate people. Not only did his pharmacy supply the ghetto residents with medicines; it also became the salon where friends came together to discuss philosophy, art, and music as well as current events. Its frequenters included the poet and composer Mordechai Gebirtig or painter Abraham Neumann. In the evenings, the Rosner brothers’ orchestra would play for the company of friends.

On 29 May 1942, the ghetto was surrounded by German police and special service forces (Sonderdienst). A document control was announced. The identity documents (Kennkarte) of all the Jews who possessed certificates of employment as craftsmen in German companies or in Jewish offices, as well as of their families, were sealed with new stamps by the representatives of Gestapo and Arbeitsamt. Those who did not receive the new stamps had to leave the ghetto. They were ruthlessly driven to the Zgody Square and deported from the Płaszów railway station to the Bełżec extermination camp on 1 June 1942.

More than seven thousand Krakow Jews were killed during three stages of the June deportation. In the next deportation campaign, on 28 October 1942, more than 4500 Jews from Kraków ghetto were transported to the Bełżec extermination camp; about six hundred were killed outright.

Liquidation of the Ghetto

On 13 March, 1943, SS troops entered the ghetto which had been surrounded by Sonderdienst forces. Inhabitants of the so-called section A were informed that they were leaving the Jewish residential quarter and moving to the Płaszów camp. Children below the age of fourteen were to stay in the ghetto. Amon Goeth, the German commander of the camp, promised they would be brought to Płaszów as soon as their barracks were ready. Not all of the Jewish parents believed him. Many tried to smuggle their children into the camp hidden in suitcases or bundles. To defeat all such schemes, the Germans would prod the luggage with their bayonets. Around 4pm, a column of Jews arranged in fives left the ghetto. Shoved about and beaten by the SS-men, they marched along Limanowskiego and Wielicka streets to the Płaszów camp.

On 14 March, 1943, inhabitants of the B section were ordered to gather in the Zgody Square. Meanwhile, the Germans were combing out the houses, killing outright all those who tried to hide themselves. The Jews assembled in the square were loaded into trucks which – guarded by SS-men on motorbikes – set out for the Auschwitz concentration camp. Around 3pm there were still several hundred people in the square, for whom there was no place in the trucks. They were all ruthlessly driven to the Płaszów camp and shot on the same day. 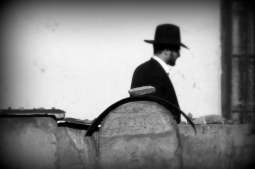 On 30 July, 1948, the Zgody Square was formally renamed the Ghetto Heroes Square. Then, for almost sixty years, it was occupied by a dilapidated bus station.

On 8 December, 2005, the space was filled with a sculptor’s installation by Piotr Lewicki and Kazimierz Łatak. Inspired by the description of the furniture left behind after the liquidation of the ghetto, the artists set up dozens of iron chairs in the square.

The Eagle Pharmacy of Tadeusz Pankiewicz was nationalised in 1951 but its former owner remained its manager until 1955, when – at his own request – he was transferred to another chemist’s shop. The Eagle Pharmacy was closed down in 1967. Then its interiors housed the Nadwiślański Bar, which was closed in 1981.

Two years later, by the ordinance of the head of the District Council of Krakow – Podgórze, a small National Memory Museum was launched in the former pharmacy. Thanks to Roman Polański’s donation of 2003, the pharmacy was renovated and its exhibition modified. Since then, The Eagle Pharmacy – under the direction of Mrs. Anna Pióro – has functioned as a branch of the Historical Museum of the City of Krakow.